Figuring out how to build and deploy an electron app is a bit daunting at first. Fortunately, the process turns out to be fairly simple once you understand the process and have a few good resources on hand. This post is meant to serve as a guide to my future self, as well as anyone else out there who needs a resource on how to set up an automated build process for an electron app.

The first issue you most likely want to resolve is the unknown developer privacy alert from apple. In order to do this, you will need to sign your app.

The code signing process is really simple with electron-builder. After paying your $100 toll to Apple, you should be able to create some certificates in XCode. Go to Preferences > Accounts > Manage Certificates. Click the plus in the bottom left and add each type of certificate. I don’t think I needed to download all of them, but I didn’t want to miss one and have to come back after I’ve forgotten this process. 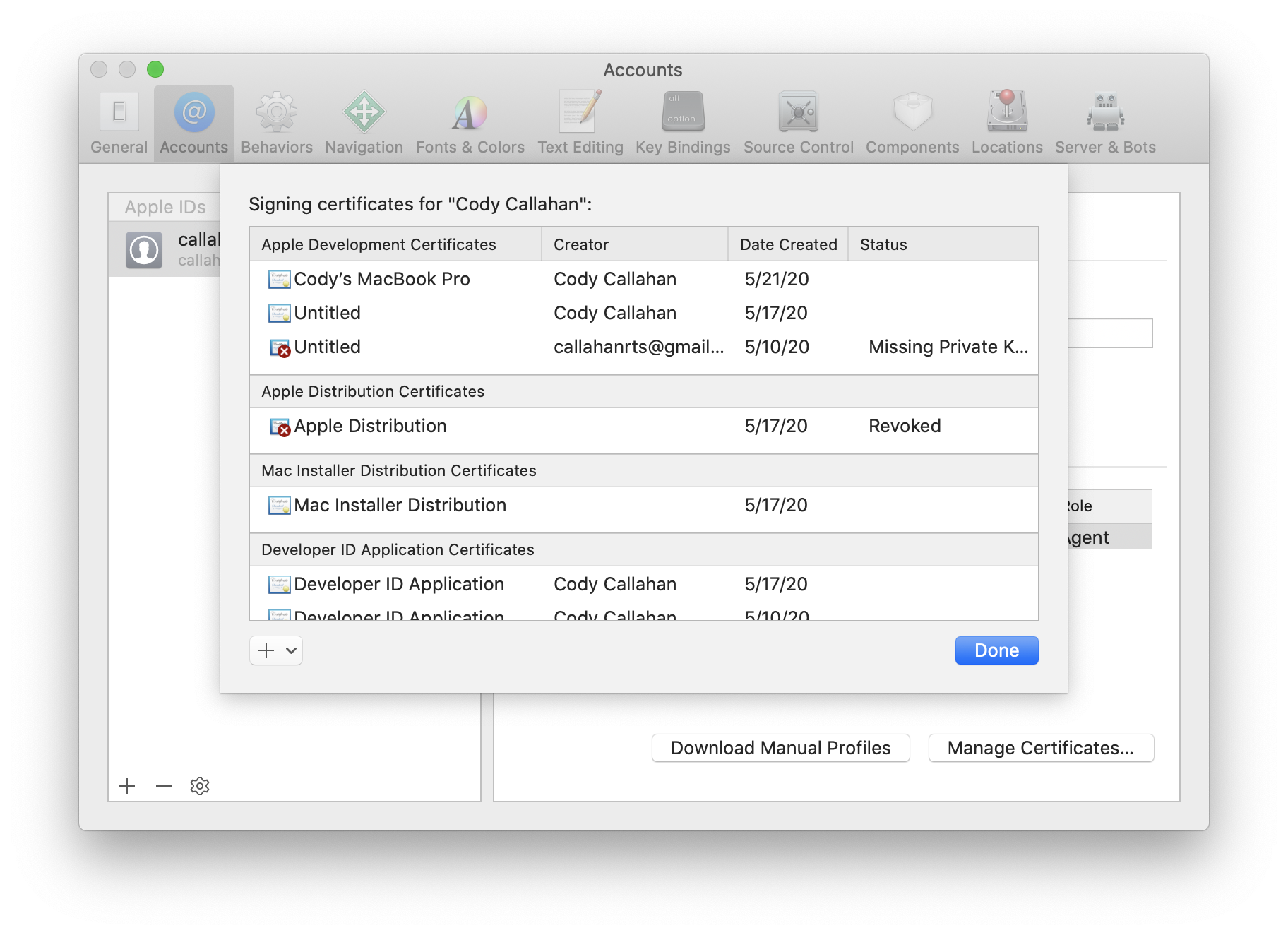 Locally, you should be able to sign your app by running your electron builder command (electron-builder) and your app will be signed. Check the logs to verify you’re not receiving any errors.

To get code signing working in a Github Action, your certificates will need to be exported. To export your certificates, open keychain and select each certificate. Right click and export to a .p12 file. Set a strong password for the file and save it in your password manager.

The simplest way to import these keys to your Github Action is to store them in a secrets variable. To do this, go to the settings page of your repository and click Secrets in the side nav. Create a new secret called CSC_LINK. The value of this environment variable is the base64 encoded value of your .p12 file.

Open the .b64 file, copy the contents, and paste the result into your CSC_LINK secret on Github. 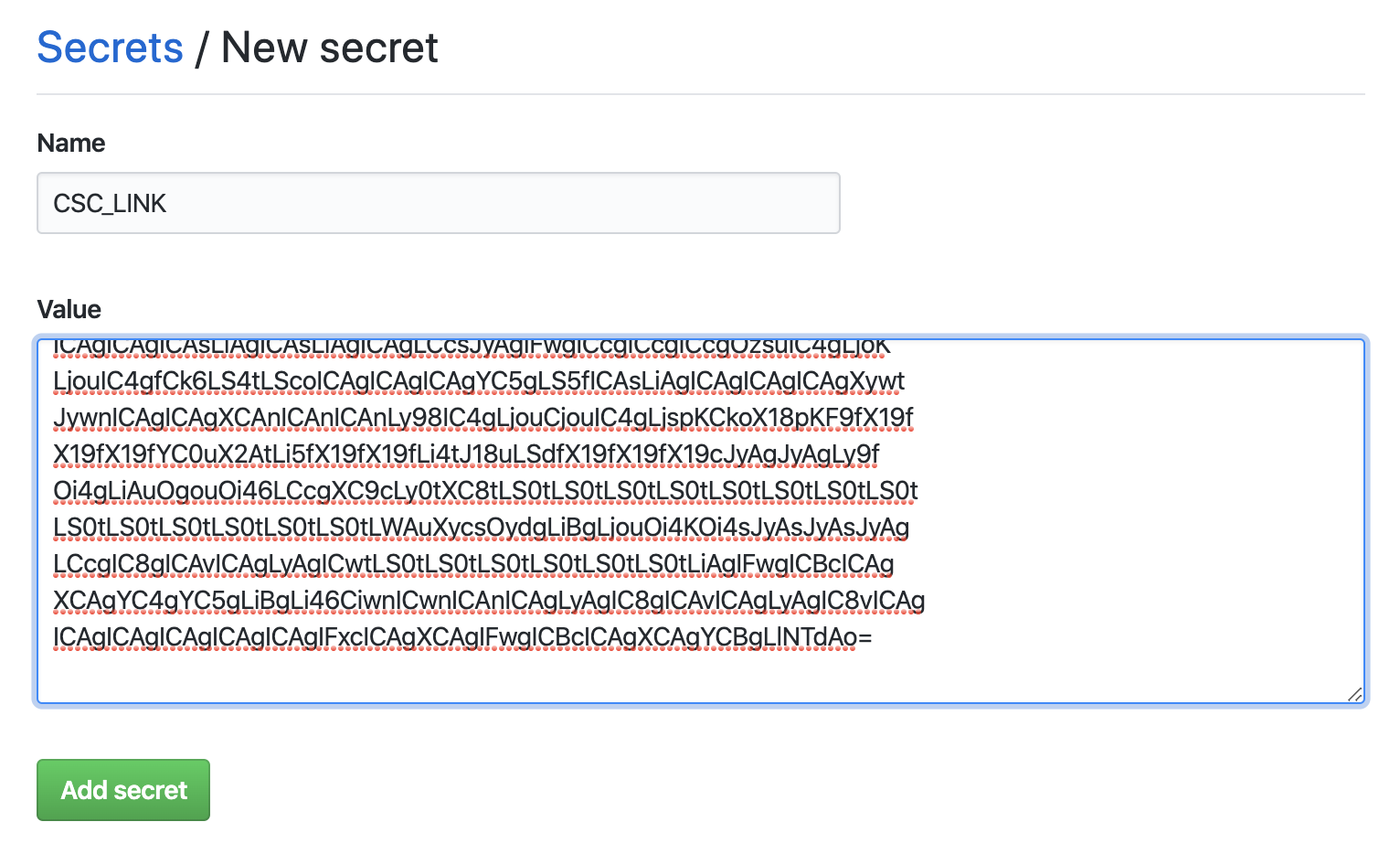 Create another secret called CSC_KEY_PASSWORD and use the password you created as the value. At this point, all the credentials needed to sign your app are available to your Github Action. The Github Action section will show you how to configure them in the action.

Code signing is not enough on it’s own to get your app through the privacy popups–it must also be notarized. From my initial research on notarizing apps I assumed the process was akin to the approval process for submitting apps to the app store. I was wrong in thinking this. It can be done as an automated process and only takes a few minutes.

Assuming you already have XCode installed and an apple developer account, you’ll need to generate an app specific password.

With your app specific password in hand. You’ll want to create two more secrets in your repository. 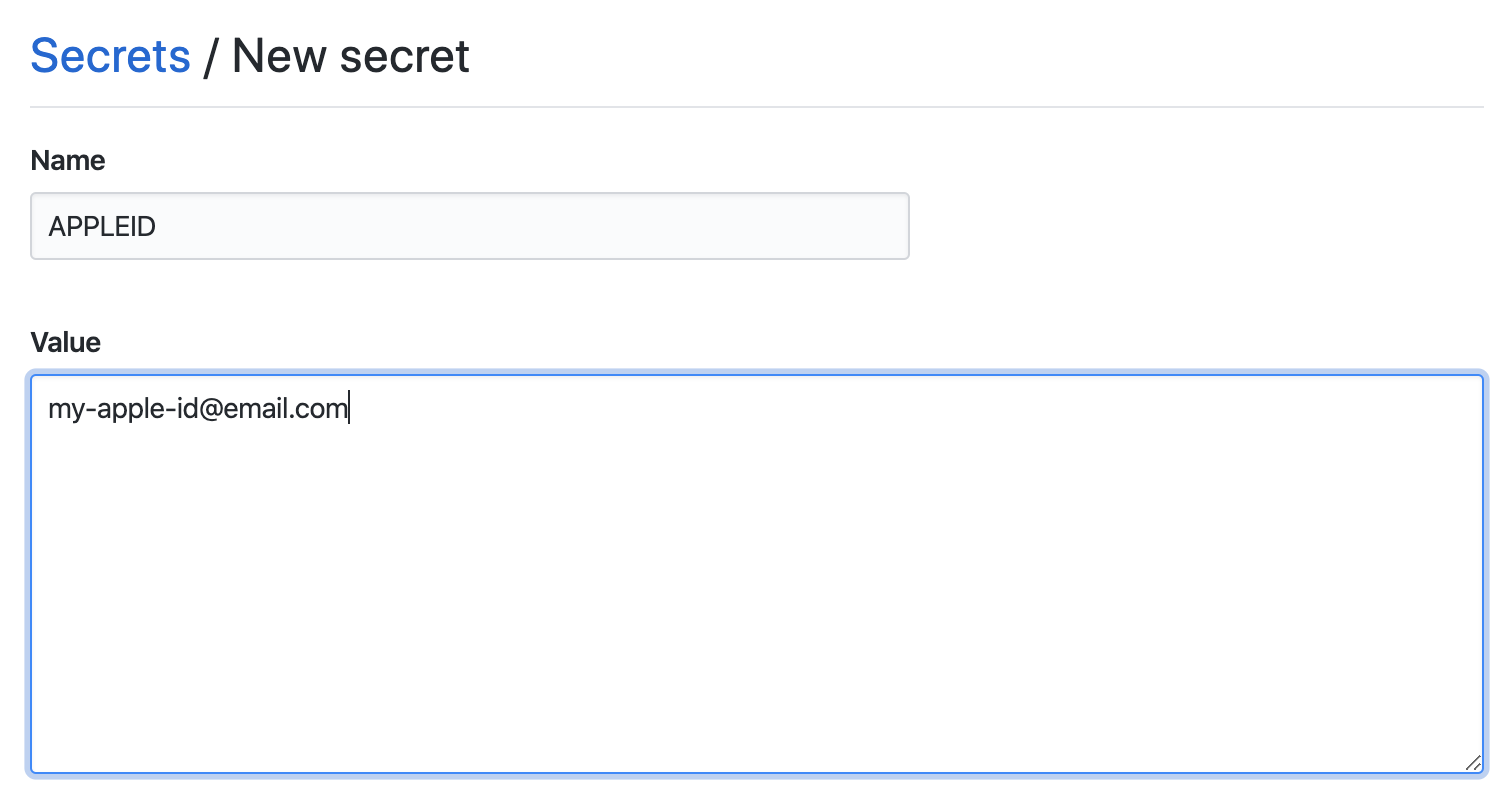 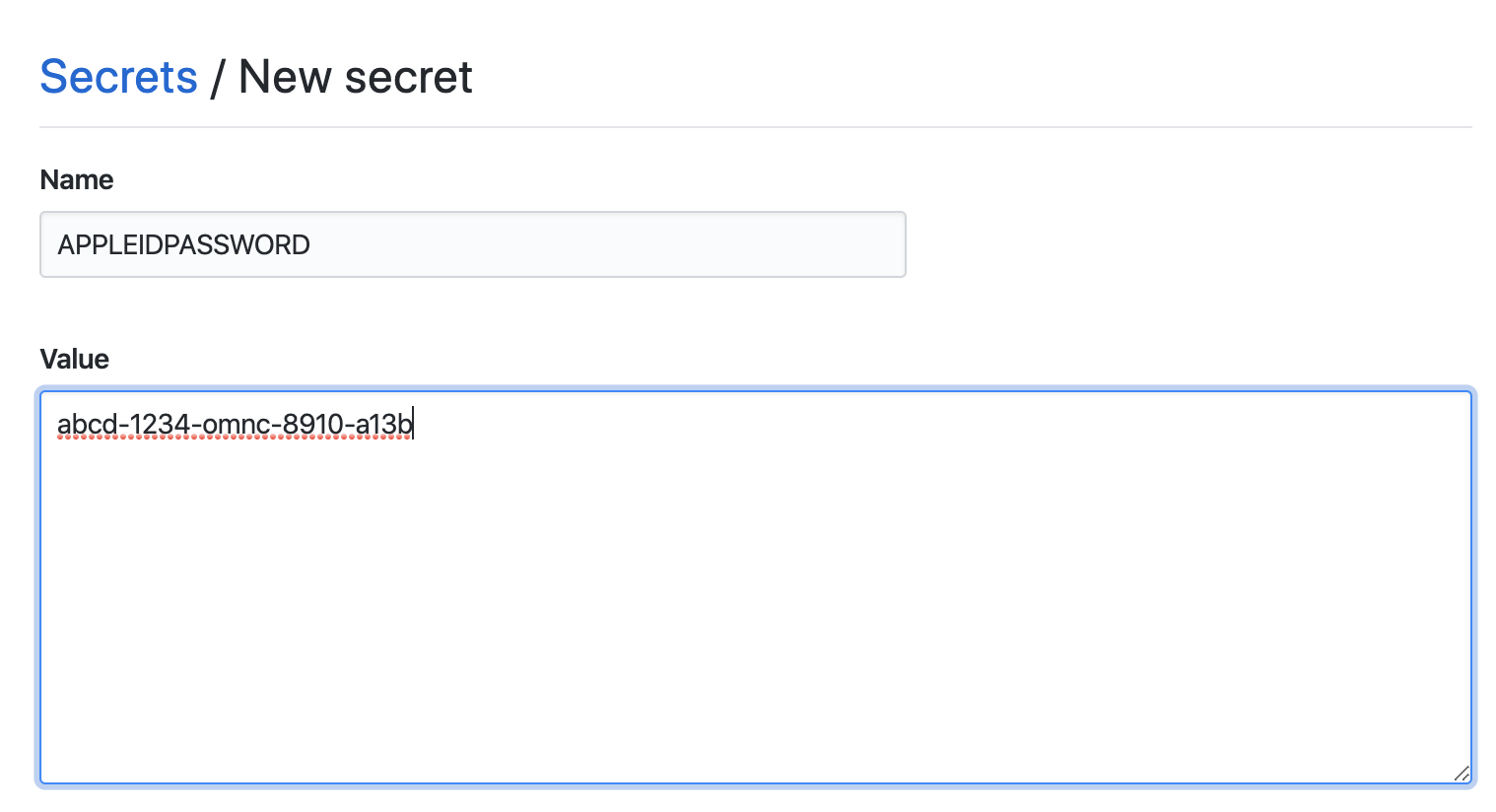 Your Apple ID is now available to your Github Action and can be used to notarize your app with electron-notarize. First, add the following line to your package.json.

The afterSignHook.js file will take care of notarizing your app. There are a number of variations of this script floating around, I started with the version from this blog post and made a couple alterations.

This script will run after electron-builder signs your app. It automates the notarization process which includes uploading your code to apple and waiting for a successful notarization response. The whole process only takes a few minutes. When notarization is complete, you should expect an email from apple confirming the status of your recent notarization.

To build your app and notarize it, you’ll need to execute a command that includes the NOTARIZE env variable. It should look something like this:

electron-builder can manage a few different strategies of auto updating your application. In order to enable this within your Github action, you must first give your action access to AWS. The AWS Cli Action makes this really simple.

All you need to do is run this uses block as your first step. This will give all of your other steps access to the aws cli. 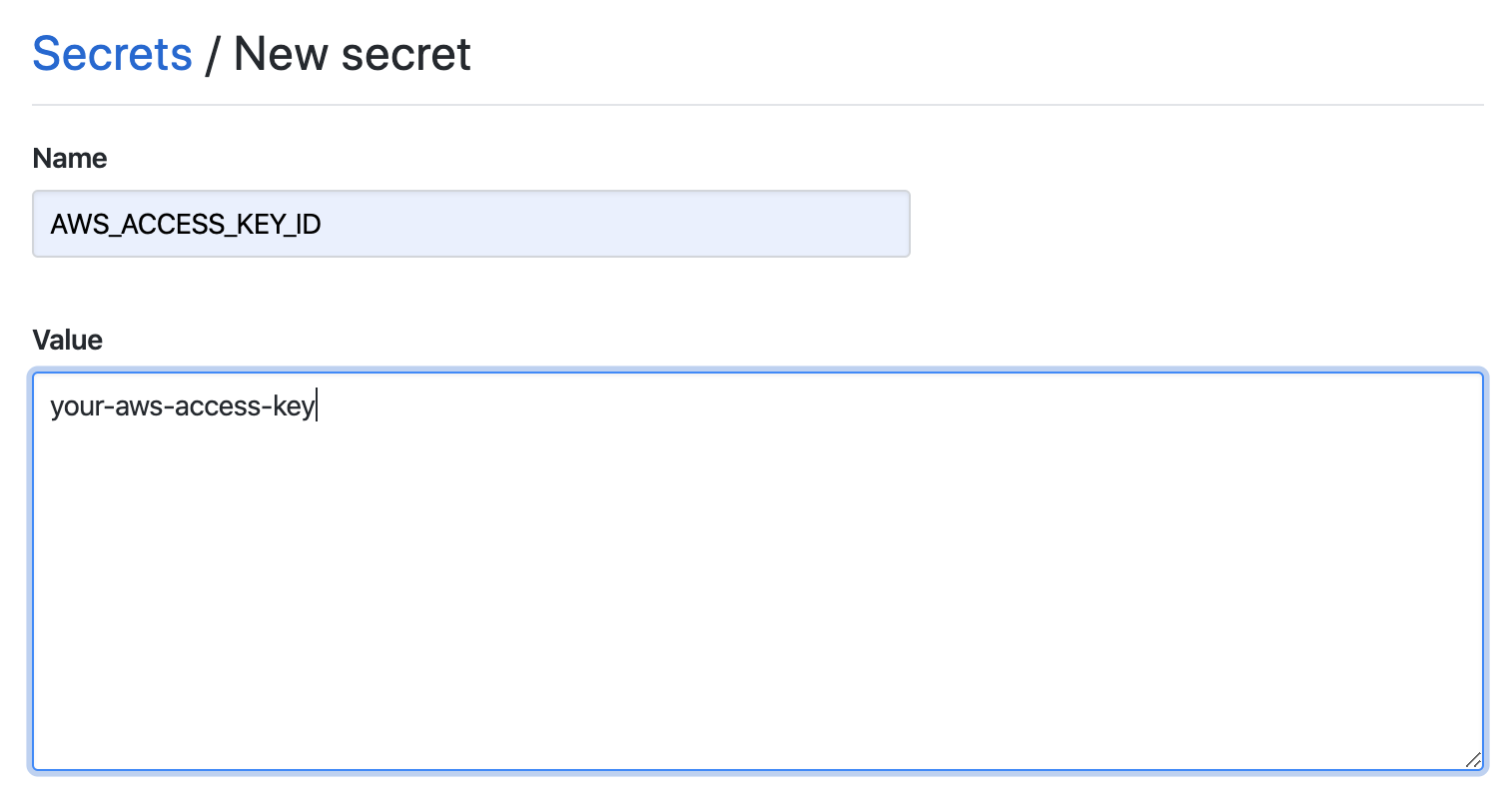 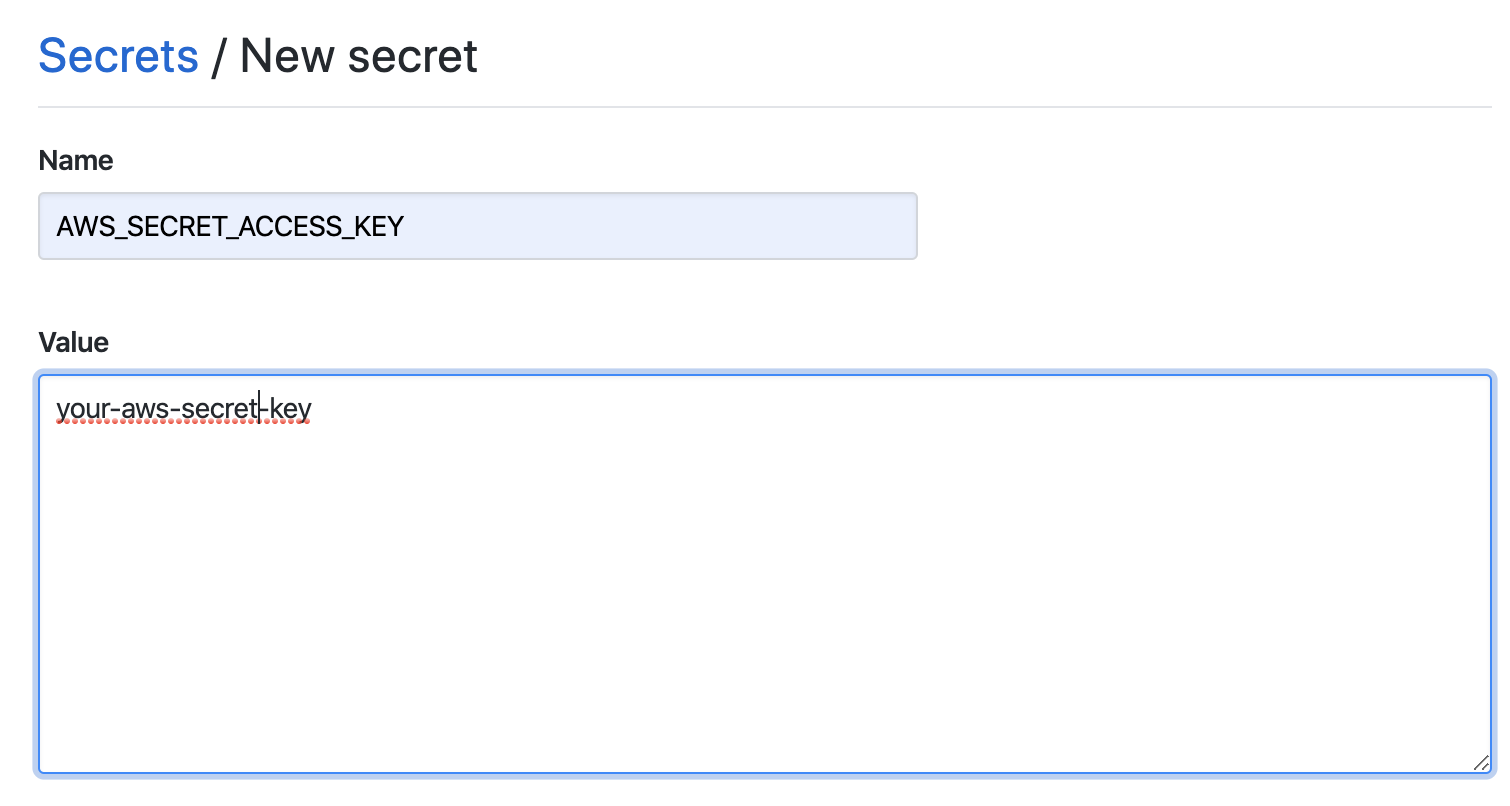 Next, you’ll need to add the AWS_ACCESS_KEY_ID and AWS_SECRET_ACCESS_KEY secrets to your repository.

To completely set up auto updates in your app, I recommend reading through this guide.

Now that github has access to all the accounts necessary, we can implement the Github Action to carry out the deployment process.

For reference, these are the corresponding scripts from package.json. This Github Action currently has room for some improvement. The build process is technically run during build and deploy. Ideally, electron-builder should only be run once. I ran into an issue where I had some missing files in my dist directory so I lazily ran the build command before deploying. Eventually, I’ll update these notes with a better solution.

The Github Action above is set to run every time you push to the master branch. My repository structure is loosely based on git flow. As such, I find it easiest to add features to the develop branch. When I’m ready to release a new major/minor/patch, I run the following script:

This probably means that the notarization process is failing. I spent too much time with difficult to trace errors just to realize I had some invalid credentials.